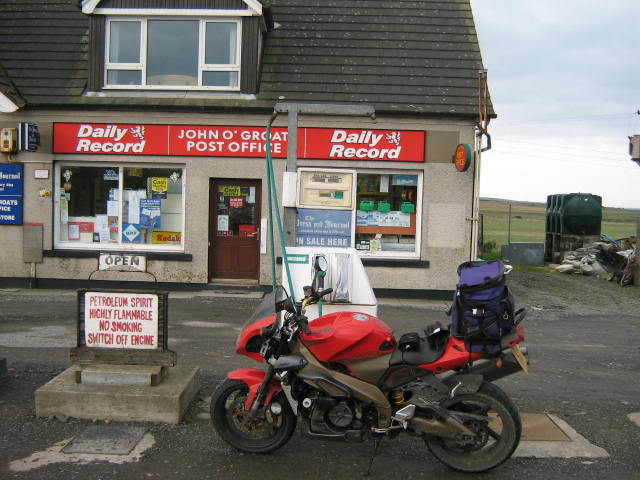 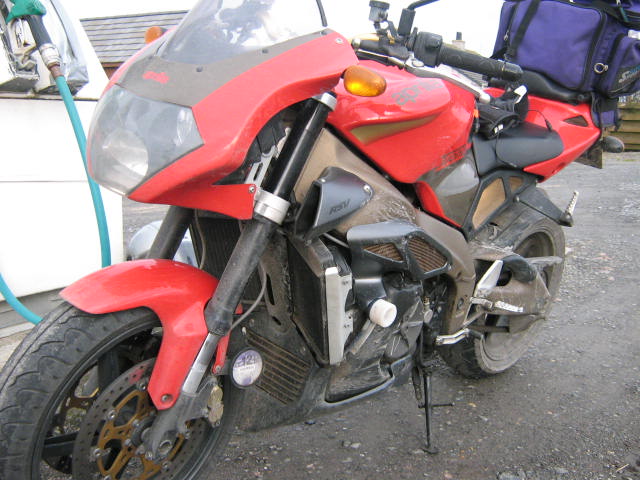 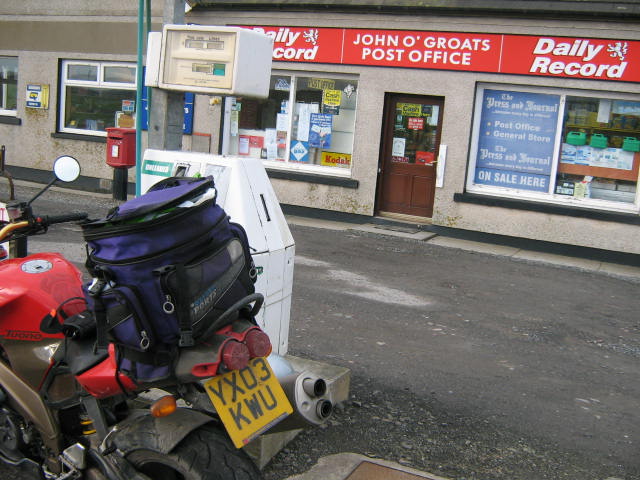 Endurance events of any nature are not for everyone, and this is certainly true in the case of motorcycling.

Motorcycling has a certain appeal, conjuring up images of an Easy Rider image on warm sunny days, on lightly trafficked roads, with reflections of the ocean in the sunglasses and the gleaming chrome only interrupted by the light covering of dead bugs.

How about winter nights, snow piled at the side of the carriageway, salty spray, cold, and a trip of one thousand miles to be done in less than one day?

So why did I set off from the filling station at South Cave at eleven minutes past midnight on the morning of January 25th 2010?

Firstly to meet a personal challenge. I had heard about the Iron Butt Association which is based in America and is all about long distance motorcycling. To be a member, the minimum you have to do is cover at least one thousand miles in less than twenty four hours and have proof that you did it. You don’t have to do it in winter.

I had planned a route which was more than 1000 miles long, had prepared myself and the motorcycle as much as I could, I flipped down the front of my helmet and set off in light rain in the direction of Ferrybridge Services. To get enough miles in I had to take a slight detour which involved calling in at Ferrybridge Services, getting a receipt and the heading north on the A1M to Scotch Corner.

The A1M between the M62 and the A1 is a dull road at the best of times, but at 1.00 in the morning on a winter’s day (or is it still night?) it is considerably less than interesting, although you do notice some strange phenomena. Like, it was noticeably colder around the Bramham junction, where interestingly, earlier in the year, there had been reports of black ice on this stretch but nowhere else. Ok, maybe it wasn’t interesting, just seemed it at the time! Anyway continuing north, onto the A1 things got warmer, not warm, just less cold.

Turning onto the A66 at Scotch Corner I decided time to switch my heated clothing on. Heading over the Pennines on the A66 towards the M6 there was snow at the side of the road, and it started getting a bit breezy, nothing too serious, just enough to step the bike out of line every now and then, but with it being dark it was hard to anticipate just when it would happen.

Travelling north on the M6 it was clear and dry and the slight breeze had dropped. A stop for fuel at Southwaite Services, and continue heading north counting down the miles to Glasgow. Skirting Glasgow to the east I started looking for fuel near Stirling. It is a good job filling stations are open 24 hours nowadays. Filling up should see me to Inverness without a stop. The headlight picked out dirty snow at the side of the A9, and it was cold and less than interesting. Snow was being blown into the overtaking lane on dual carriageway stretches, which meant to be safe I stayed behind a lorry, it slowed me down a bit but better than risking anything on loose snow. As it turned out, I got to Dingwall near Inverness on the one tank full, although my low fuel warning light had been lit for a few miles by this time. But it was getting light which always lifts your spirits.

The A9 north of Inverness to Wick is a great stretch of road, parts of it hugs the coast and it has a balance of twists, hills and straights which makes it one of those roads which motorcyclist and drivers love. As a bonus, it was dry and sunny, with little traffic. I was enjoying myself and making good time. Not quite the Easy Rider image, but I was next to the sea, no gleaming chrome, just a pretty general all over covering of road dirt and dried road salt spray. Good job I had washed my visor at the filling station as my gloves were damp and dirty and wiping the visor just caused to film of dirt to smear.

My turn around point, the Post Office and filling station at John O Groats was reached at just after half past nine, about nine and half hours after setting off.

The trip back to Inverness was every bit as good as the trip north. Dry roads, winter sunshine, little traffic, and the knowledge that I had got past half way and was on my way back home. Filling up north of Inverness, there were a lot of customers on the forecourt, and moving my bike to allow another motorist to use the pump, (I’m good like that). The snow that was picked out in my headlight a few hours earlier could now be seen in daylight. There was a lot, and even more on the mountains. At the road side it must have been about 1 metre deep, a legacy of snow ploughs at work, but there was still a good covering beyond. Where I was heading there was grey sky, and there was a light snow shower around the Aviemore area. The A9 is patrolled by unmarked police cars so it was not a good idea to ‘enjoy my machine’, so even though this road passes through some beautiful countryside, it was not the most interesting part of the trip, I had already had that further north.

Perth was the next fill up, for bike and rider. Next fill up, for the bike, would be south of Glasgow. Pulling in at Gretna services I filled the fuel tank. After being in the saddle for more than 14 hours, my knees were starting to ache a little, so I really needed to stretch my legs. A short wander around the forecourt and I was feeling better, the aches soon wears off, so throwing my leg over the bike again I turn the key, press the starter and……………………………….nothing. A dull clunk and that is all. A couple of friendly gentlemen tried to help me bump start it but it is a high compression 1000cc engine in a lightweight bike, dumping the clutch just locked the back wheel. The AA (Automobile Association, not the other one) came to the rescue and got the bike going. But we were not sure what the problem was. Travelling back over the A66 I was trying to work out if I could get home on the fuel in the tank. I couldn’t, I would have to stop at Ferrybridge Services and fill up. That would mean switching off. Would it start again?

A call from Scotch Corner, whilst leaving the engine running, made sure a friend would be at Ferrybridge with a starter pack just in case. Travelling south on the A1, as I was following a car overtaking a lorry, I saw something ‘move’ on the central reservation, at first I couldn’t make out what it was, but I soon knew when it stuck itself to the front of my bike across my headlight. A poster sized piece of paper had blown across and was stuck on my headlight. Stretching forward I managed to grab it and pull it off and once again I could see where I was going, always useful I find.

I got to Ferrybridge Services and left the bike running for a while, a text told me my friend was on his way with the starter pack. Nothing to lose, I switched off, filled up and pressed the starter. It started. Leaving it running while I paid for the fuel, rang my friend to say everything was fine but he might be needed at South Cave. I set off on the last leg of my trip. I was looking forward to warmth as I had turned off my heated clothing at Gretna, so the last 3 hours of riding had been without heated clothing, except my gloves, and on a winter’s night.

The till receipt for fuel at South Cave service station, where I set off from earlier that morning showed the time as 20.54. According to my mile counter I had covered 1076 miles in less than 21 hours, if you knock off the time spent waiting for the AA less than 19 hours and 45 minutes.

I was tired, a bit cold but happy. I had the records to show I had covered the mileage and should be eligible for membership of the Iron Butt Association. I had done what I had set out to do and, to be fair, enjoyed it.